It only seems like yesterday that I set up a new blog. It was actually a couple of months ago. How many posts do you think I’ve written since the initial one? Yep, you guessed it, none. A big fat 0. I think that’s partially down to the fact that I really wanted my blog running on the Ghost platform, but for reasons I won’t go into, couldn’t. With a heavy sigh I then turned to the old default for blogging, WordPress. Now, don’t get me wrong, WordPress has served me very well over the years. I began using it when the software was less than a year old, and was quite involved with the community back then. I loved WordPress. These days though, not so much. It’s big and bloated and is way overkill for a simple blog like mine.

Enter Hugo. This is my new love. I can write a blog post in Atom, push it to Github and then Netlify auto publishes it. All for free! It’s a beautiful thing. Also, it may not be Ghost, but I’m using a port of the default Ghost theme so I’ve brought a little bit of it over with me. 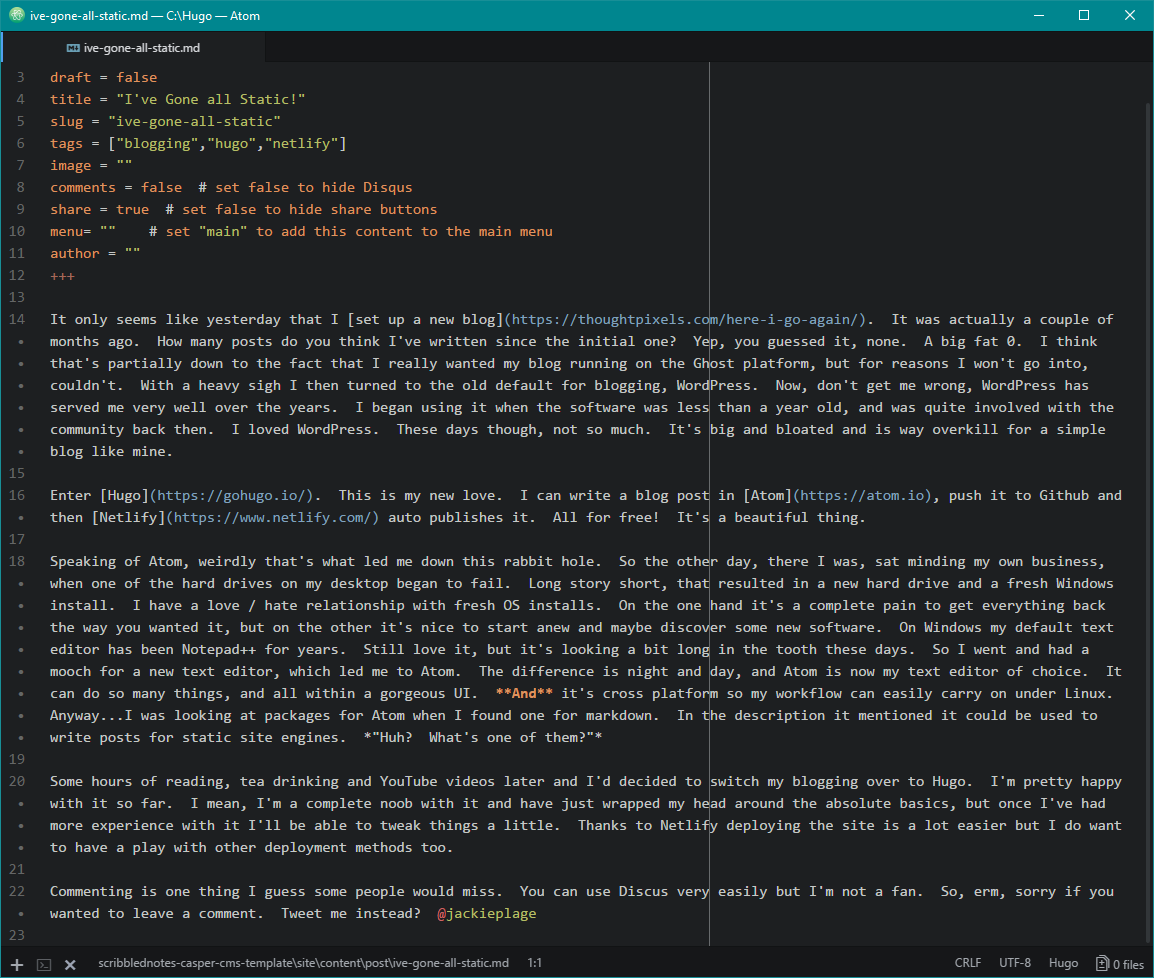 Speaking of Atom, weirdly that’s what led me down this rabbit hole. One day about a week ago, there I was sat minding my own business, when one of the hard drives on my desktop began to fail. Long story short, that resulted in a new hard drive (thanks to my Dad, I’d be screwed otherwise!) and a fresh Windows install. I have a love / hate relationship with fresh OS installs. On the one hand it’s a complete pain to get everything back the way you wanted it, but on the other it’s nice to start anew and maybe discover some new software. On Windows my default text editor has been Notepad++ for years. Still love it, but it’s looking a bit long in the tooth these days. So I went and had a mooch for a new text editor, which led me to Atom. The difference is night and day, and Atom is now my text editor of choice. It can do so many things, and all within a gorgeous UI. And it’s cross platform so my workflow can easily carry on under Linux. Anyway…I was looking at packages for Atom when I found one for markdown. In the description it mentioned that it could be used to write posts for static site engines. “Huh? What’s one of them?”

Some hours of reading, tea drinking and YouTube videos later and I’d decided to switch my blogging over to Hugo. I’m pretty happy with it so far. I mean, I’m a complete noob with it and have just wrapped my head around the absolute basics, but once I’ve had more experience with it I’ll be able to tweak things a little. Thanks to Netlify deploying the site is a lot easier but I do want to have a play with other deployment methods too.

Commenting is one thing I guess some people would miss. You can use Discus very easily but I’m not a fan. So, erm, sorry if you wanted to leave a comment. Tweet me instead? @jackieplage

Read other posts
← Hello Darkness my old Friend Is This Thing on? →